A Study in Pink – The Great Toy Shop Divide

Well I think today’s topic can be summed up absolutely beautifully by a little girl called Riley, who seems to at 3 years old, really recognise (and feel frustrated by) the gendering present in toy shops. I thought I’d start by looking at some of the work that has actually been done to try and look at toy preferences in children. It’s a topic that has been looked at quite a lot by scientists, actually. A relatively accessible review crammed full of references can be found here, but the key stuff it basically says:

So okay, it seems reasonable to me that there is reason to think that there may well be something in the idea that some of the objective differences in how sexual differentiation affect brain development may cause some general trends in behaviour. Yes, there are very much arguably issues with the work that should be looked at, like how they’re actually defining ‘male toys’ and ‘female toys’ without making assumptions which could affect the results they get, for example. But I’m more interested in when it comes to real life stuff. Like what people actually push in the direction of their kids, or say is okay, or not okay. 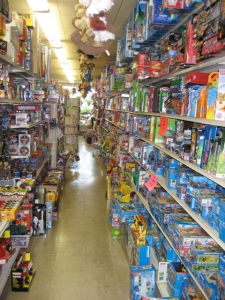 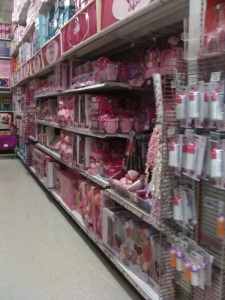 We don’t need to consider the incidences with which children play with any given type of gendered toy, in order to understand that frowning upon, discouraging, or attempting to prevent any child from playing with whatever colour and style of toy they want is senseless.  By arranging their toys in the way that they do, shops send out a strong message to parents. They are saying ‘This is what you should buy the boys, and this is what you should buy the girls’. How painfully unfair to any child who has desires outside of this schema, and that’s before we even consider the sometimes painfully inflexible views of parents themselves, as the above link highlights.

IF A GIRL HEARS THESE STORIES SHE WILL EXPLODE. FACT.

How difficult would it be to actually catalogue the toys in a manner that didn’t make the assumptions that every boy wants to fight monsters in a mud pit with his ray gun that is ON FIRE, and every girl wants to bake cupcakes for her dollies whilst riding ponies wearing ballgowns through a field made of kittens? I really wish I had an image to accompany that question. Instead, I will show you pictures of my two favourite toys when I was a little boy. 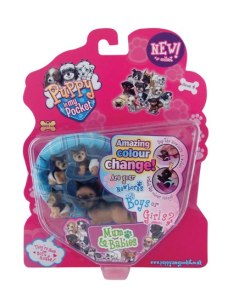 I tended not to play with them at the same time. I don’t think the puppies would’ve done well in a firefight.

It would be unfair to imply that all parents are utterly stuck in perpetuating an unfair toy-divide. There have been a few cases (and here is one of them) of parents attempting to raise a ‘gender-neutral’ child, or more accurately as this article points out, parents attempting to reduce the amount to which their child is shaped by expectation rather than free choice. Likewise, progress has been made when big shops like Hamleys are revising their signage, for whatever reason. Also, not all the research being done is simply in terms of neurology, with a framework focussing on difference between two sexes. If you check out chapter six (‘Toy Choice’) of this book, you can read a little about the fascinating experiment done where a teapot was made spiky and army-esque, and a gun was made purple and covered in rhinestones to examine how this would impact the items desirability to children. It was concluded that:

Even when children are presented with familar objects, guns and teapots, whose “gender typing” they know well, they are more likely to base their decisions about whether the toys are for boys or for girls on what “boy stuff” and “girl stuff” looks like than on innate qualities of the objects themselves. These choices are learned and likely reflect the preferences of marketers and advertisers more than any basic gender differences.

Another experiment highlighted in the above book looked at how toy choice was impacted by a child’s perception of their parent’s views on them playing with toys ‘for boys’ or ‘for girls’ looking at kitchen sets and tool kits. Unsurprisingly little boys who felt their fathers might judge playing with girl’s toys to be a bad thing didn’t go anywhere near the kitchen set when it was labelled ‘for girls’. Toy shops don’t justify their shelving habits with research studies. They simply follow along with tired old stereotypes that for some reason, just haven’t yet been questioned or challenged in many many places. Maybe it isn’t seen as important? But this sort of progress helps add to a ‘social awareness’ that will just help us get to the point where the idea of judging a child on their toy choice would be regarded as ridiculous as it really is.

Drag, sexualisation, and the question of ‘age appropriateness’…

The essentials – Trans 101, but not as you know it