Dang is the creator of racistsofgrindr.tumblr.com – a site which allows submissions of screenshots of racially problematic encounters on the now infamous app, or similar. He offered me some of his time to talk about this issue.

Ben: Hi Dang, so tell me, where and how have you experienced racism in LGBTQ contexts?

Dang: Oh, well, it’s definitely most prevalent online and in hookup culture. I can’t speak for other orientations, but among MSM (men who have sex with men) you see it in people’s profiles as if it’s no big thing – “no Asians” or “no Indians” – or else in the way they see race first and a person second, whether or not they’re trying to be complimentary.

Ben: Do you think it’s more obvious as a digital phenomenon?

Dang: Definitely. It’s a cliché, but I do think it’s easier for people to be douchebags from behind a computer monitor. It gives us a sense of distance and helps us dehumanise the people we’re talking to, so we say and do shit we would never dream of doing in real life. So while a lot of people – I hope – would never verbalise their racism in the flesh, they feel perfectly comfortable doing it online because they can be reasonably confident they won’t get bottled for it.

Ben: What do you think of the defence ‘but it’s just a preference’, that can be used?

Dang: I think that the people who use it haven’t really examined its implications. Of course we all have our preferences, we’re all turned on by different things, but those things are informed by assumptions about those qualities to which we’re attracted. Some people like well-groomed men because of the assumption that they’re classy and genteel, while others like rugged men because of the assumption that they’re strong and masculine. I like well-read men who slow-dance because of the assumption that they’re intelligent and romantic. The same applies to race-pursuing, or dismissing someone based on their ethnicity. To do so is basically making an assumption about it, and in the case of Asian men, it’s assumed we’re effeminate and submissive. It’s even seen in those who are trying to turn it into a compliment. I’ve seen men describe Asians as being “smooth” and “cute” and “polite” – all terms denoting delicacy, infantilism and effeminacy. 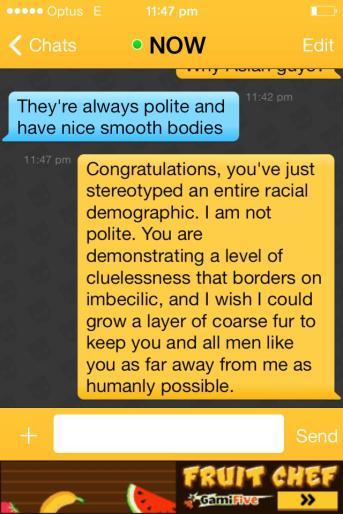 Dang: It’s also fucking stupid in that Asians literally come in every shape, size and colour, from dark Sri Lankans to the most moon-pale Korean, from a big-bellied paterfamilias in Mongolia to a lithe nymph in Vietnam. So it’s not an aversion to the way we look, it’s an aversion to Asianness and all the assumptions that go with it.

Ben: Do you think that most people who fetishise Asian men sexually have a broadly similar conflation of what it means to ‘be’ Asian in mind?

Dang: Oh, definitely! If they specify that they prefer Asian men, ask them why. What is it they like about Asian men? Nine times out of ten they’ll reply with some shit about how Asian boys – and it is almost always “boys”, never men – are smooth, or polite, or friendly, or humble, or some other absurd trope that continues the grand tradition of inscrutable, submissive, sexless Orientals who are never a threat to white masculinity.

Ben: So it’s tied up in a power dynamic, then.

Dang: Partly, although I don’t think it’s a conscious domination thing. I mean, I don’t think white men are sitting at home thinking up new ways to retake Hong Kong and conquer the Celestial Empire for its tea and porcelain, but there’s definitely a reason why so many relationships between Asian men and white men have a not insignificant age disparity, as well as the fact that the language white men tend to use about Asian men has pretty heavy connotations of, well, effeminacy (I keep using that word!) which in turn has connotations of weakness. So yes, I do think there’s a power dynamic there.

Ben: How about responses these guys give to rejection, or being called out?

Dang: In both instances, I’ve found that white men tend to dismiss the people who reject or call them out. They can afford to – whiteness is normalised and reinforced everywhere as being not just the standard or the norm, but the ideal, while Asian men occupy a spot near the bottom of the totem pole of desirability. So if one Asian out of five calls out or rejects their racist bullshit, they can just block him and move on to the next Asian, because a lot of Asian men aren’t as picky. They feel like they can’t be.

Ben: Is it just blocking, or does it ever result in abuse? i’m imagining the potential for guys to be affronted, as if by giving their attention they’ve offered a compliment, positioning you as ‘ungrateful’, for instance. I’m imagining a parallel with when men who compliment women will say things like ‘yeah well you’re ugly anyway’ after a rejection.

Dang: It can. I mean, rejection always hurts, no matter how much of a pig-ignorant punk ass douchewaffle you are. Mostly I just get blocked because I tend to be pretty belligerent, but I’ve had a few men deliver parting blows at my bitchiness. One even called me “a yellow”. He used the particle and everything, it was so retro.

Ben: You say the totem pole – do you conceive of a fairly clear hierarchy then? who is situated where? Can you say a bit more about the idea that Asian men feel they can’t afford to be picky? where does that come from? Especially given how it implicitly positions rejecting racially problematic overtures as a ‘pickiness’!

Dang: There’s a very clear racialised hierarchy of gay attractiveness. White men are at the peak, of course. Beneath them are Latino men. Beneath them in turn are Middle Eastern and Black men, with Asians and Indians at the bottom. There are other hierarchies of attractiveness – body type, clique or “tribe”, scene or fetish – but I’m not sure I’d be qualified to pronounce on those.The fact is that white men are wanted by everyone, including each other. Those who will express interest in Asian men are in high demand but comparatively low supply. Asian men, however, are rarely wanted by anyone. Low demand and comparatively high supply. So when one of the sought-after white men is willing to fuck an Asian man, Asian men jockey for attention. It’s no secret that Asian men – just like men of every other colour – often prefer white men over other Asian men. So an Asian man who is willing to write off a potential white sexual partner is seen as picky, because he’s turning down a chance to have sex with one of the coveted Caucasians.

Ben: What do you think positions Latino men above Black and Middle Eastern men? or indeed those groups above Asian and Indian men?

Dang: The cynic in me wants to say that the racial totem pole is formatted according to proximity to white aesthetic values, but again, I think it’s based on certain assumptions about race. We have the Latin lover stereotype, in which both Hispanic men and women are stereotyped as being promiscuous and passionate. Middle Eastern men have the benefit of being more likely to appeal to Eurocentric aesthetic tastes while retaining a sense of exoticism and Otherness (both in a way that can be fetishised and rejected) while black male sexuality has a long and horrifying history of being stereotyped as threatening, but also wild and exciting. Asian and Indian men both suffer from being seen as intellectual, polite and dispassionate – whitefaced geisha and smiling grocery store owners and short but wealthy businessmen and computer technicians.

Ben: What do you say to people who would argue ‘if you don’t like it, don’t use the app!’ or ‘you can just ignore those people!’?

Dang: I think that I shouldn’t have to make room for the shitty behaviour of others. I shouldn’t have to avoid spaces I want to inhabit for fear of being casually dehumanised. Besides, if I just grin and bear it, I’m basically normalising it as an acceptable status quo.

Ben: Do you think there’s any room for men of colour to use racial profiling to their advantage? Playing up to a fantasy in order to procure sex with someone they like the look of, for instance.

Dang: Oh, definitely. If they’re willing to stomach it, they could have frequent and satisfying sex by playing the role set out for them. Many do. I did for a long time, because I was convinced I wouldn’t get a man any other way. There’s something in Sartre about that, isn’t there? Protect yourself from being objectified by pre-objectifying yourself. Make yourself an obscene object and people lose all their power to hurt you.

Ben: Finally, if you had to give any advice to queer men of colour who struggle with self-image due to racist standards of attractiveness, what would it be?

Dang: Don’t take it lying down. Don’t accept things the way they are. Shout, rant, get angry, spit venom, throw a molotov. Try to make it so that no one else ever has to feel the same way you did.

Dang Nguyen is a knot of serpents masquerading as a boy. His divinity has spent twenty-two years in its current mortal vessel, which resides in the principality of Melbourne, Australia. His hobbies include embroidery, literary analysis and the pursuit of ageless immortality.

The 32 Problems I Found with this Gender Identity Service FAQ Guide.

Comments on: "Racism in the World of Gay Apps – An Interview with Dang Nguyen" (2)